Do you struggle with weeds like I do? I try to prevent weeds as much as I can, but nature will always win. So when those pesky plants pop up, I make a batch of homemade weed killer to get rid of them fast. 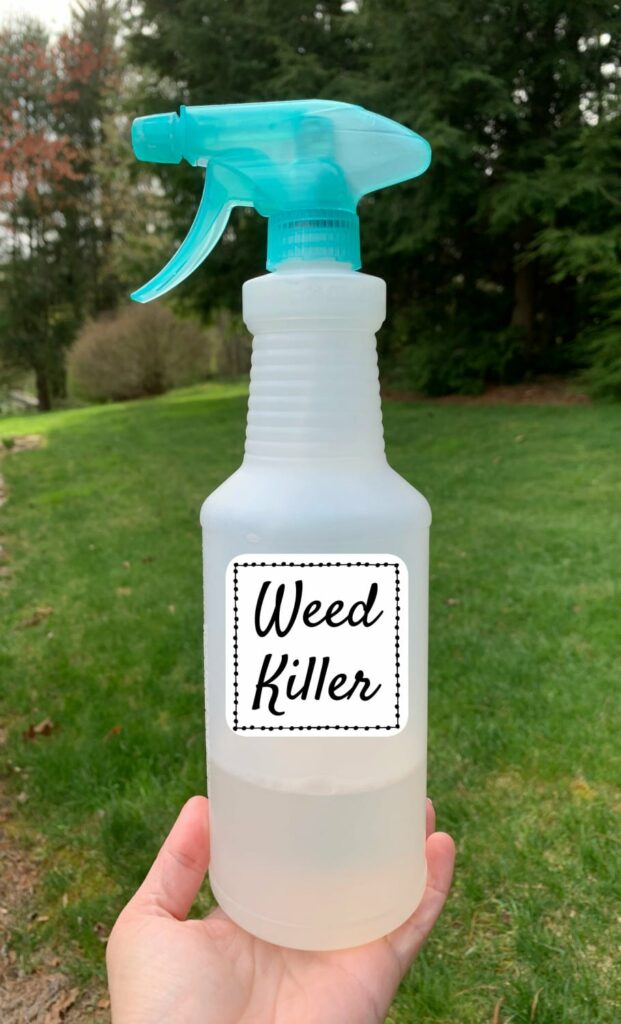 Plus, this weed killer is safer for pets and children!

And, it cost around $2.50 a gallon to make compared to around $20 for the conventional stuff with glyphosate in it. 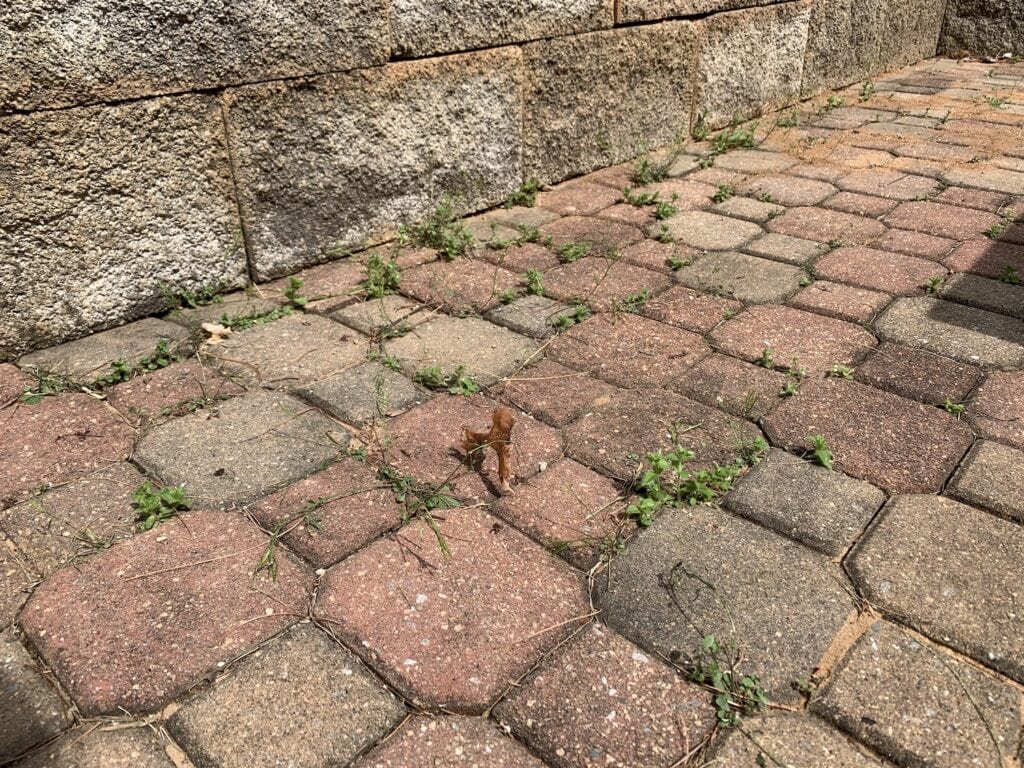 I had never made my own weed killer before (other than killing weeds with vinegar) but I wanted to know if home remedies to get rid of weeds actually worked. And I wanted to save money.

So I started investigating how to make homemade weed killer and instantly realized it’s a smart move to make your own.

What 3 Ingredients to Use

When you make a homemade weed killer, you are wanting to use ingredients known to get rid of vegetation but not harm humans.

Over decades of research, there are three common ingredients that have proven effective at killing weeds at home time and time again. You will likely find these same ingredients in most homemade weed killer recipes:

Random ingredients, I know. But together they create a dream team of weed killing. Why?

Vinegar is acetic acid. And that acid is what kills the plant.

Using horticultural vinegar on its own works, but it is expensive. And it’s hard to find. Plus, I have had physical reactions to the strong and harsh fumes when using it (much like I did when making this vinegar gel cleaner).

Using normal white vinegar will kill plants, however the acidity level is around 5% in kitchen vinegar. So it works more effectively when mixed with the other two ingredients.

The salt really helps boost the weed killing power of this homemade weed killer. You can use either cheap table salt or Epsom salt (I was really pleasantly surprised at the price of Amazon’s brand of Epsom Salt).

Either one is going to dry out the plant in the sun. And that’s a good thing.

I personally use table salt because it was super cheap (about .79 cents for 26 oz.) for a huge bottle. I have found Epsom salt at the dollar store, too. I wouldn’t use fancy pink Himalayan sea salt or coarse salt that costs a pretty penny. Get the cheap stuff.

Okay, most homemade weed killer recipes call for Dawn dish detergent. It seems that Dawn detergents are the magical ingredient for many DIY recipes.

Why use dish detergent?

It’s what keeps the weed killing spray stuck to the plants. Without the soapy residue that sticks to weeds, the vinegar can just run off.

Soap is actually commonly used in a lot of gardening solutions. If you don’t have these types of dish detergents at home, try it with Castile soap or some Branch Basics.

P.S. Try this ant spray safe for pets which uses detergent, too!

Here’s how to make homemade weed killer. If you can shake a bottle, you can do this!

(These are the ingredients I personally used. They are all Publix brand.) 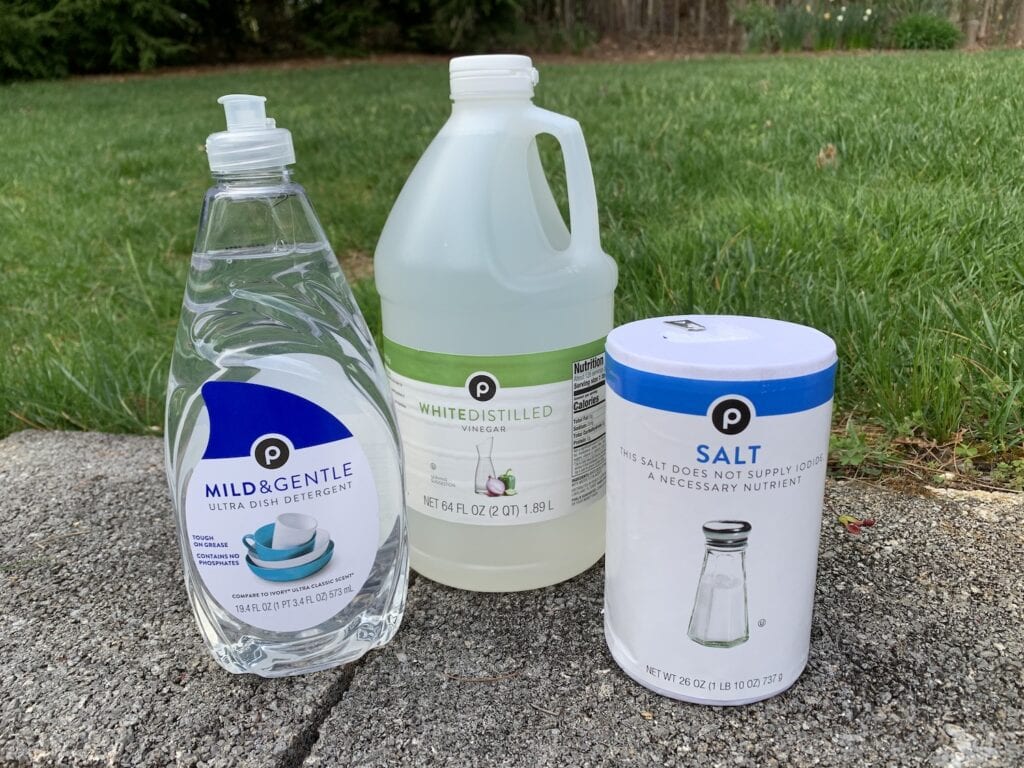 I’ve got to say, I was very skeptical about this weed killing solution working. But it did! 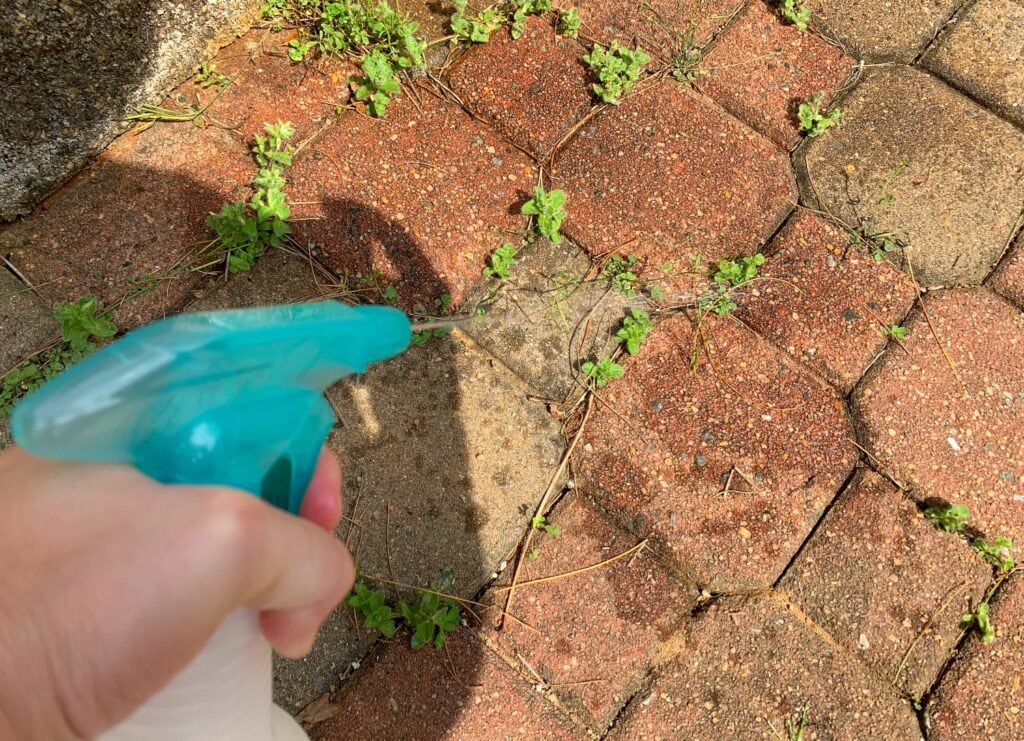 We sprayed it on a variety of different types of weeds throughout the garden and patio on a hot sunny day.

Within an hour, the weeds were shriveling up and drying out! They had gone from green to gray in 60 minutes. 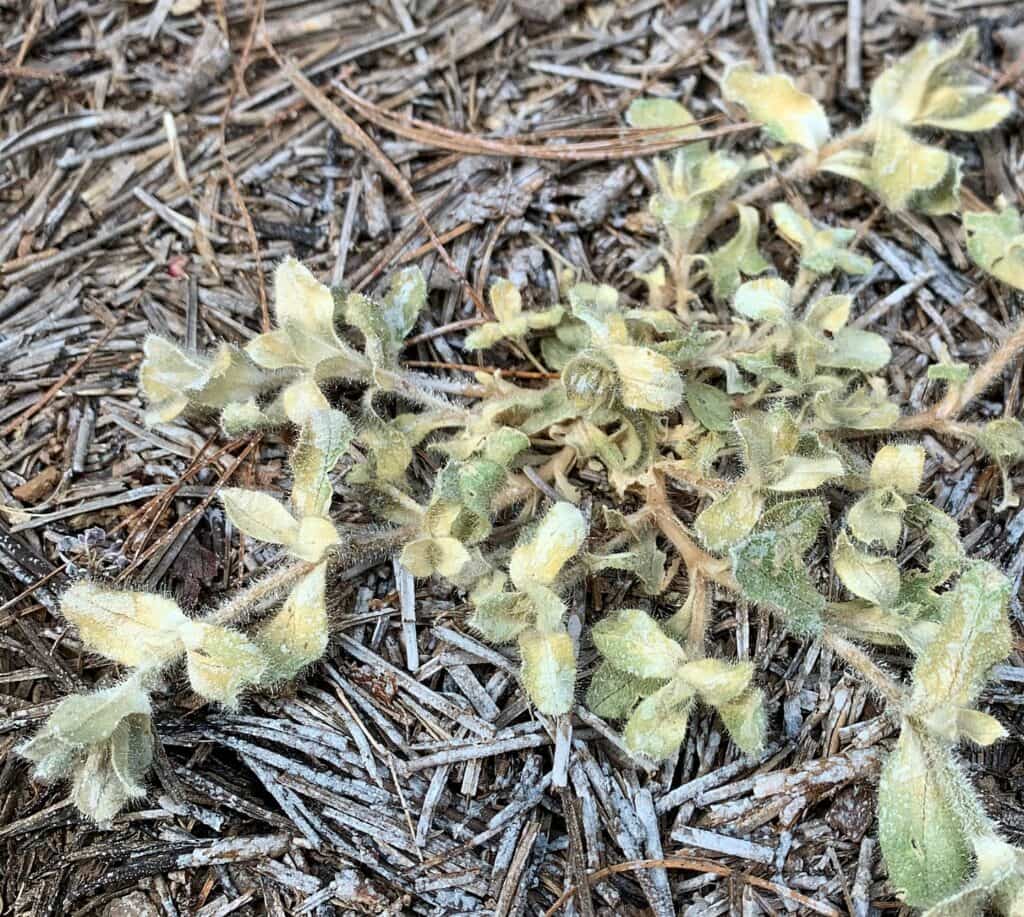 Can you see the salt and detergent stuck to the leaves? 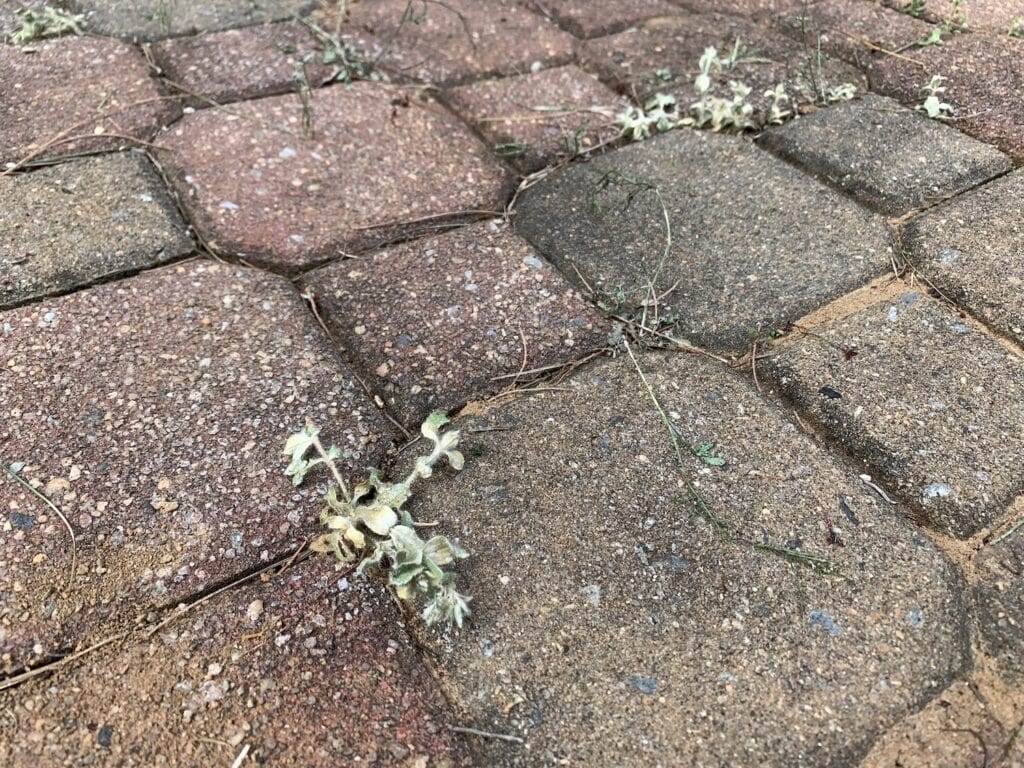 Over the course of the day, the plants continued to die back even more. They were definitely eliminated.

Here’s what I learned about making my own weed killer. 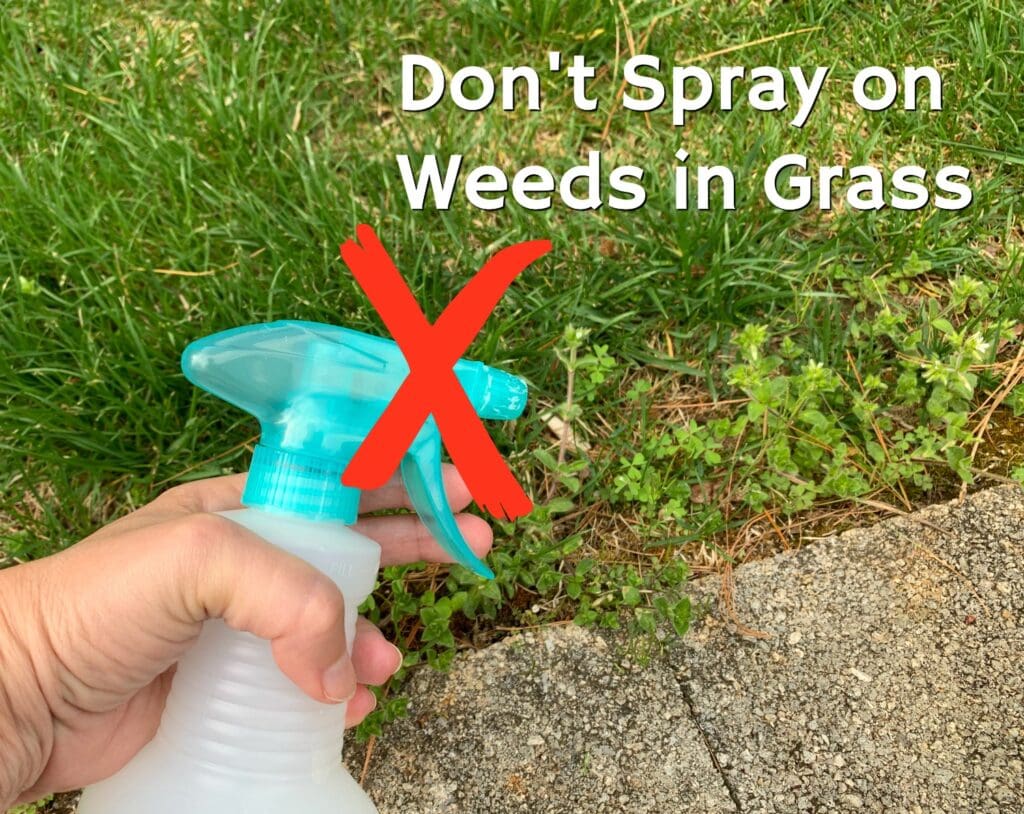 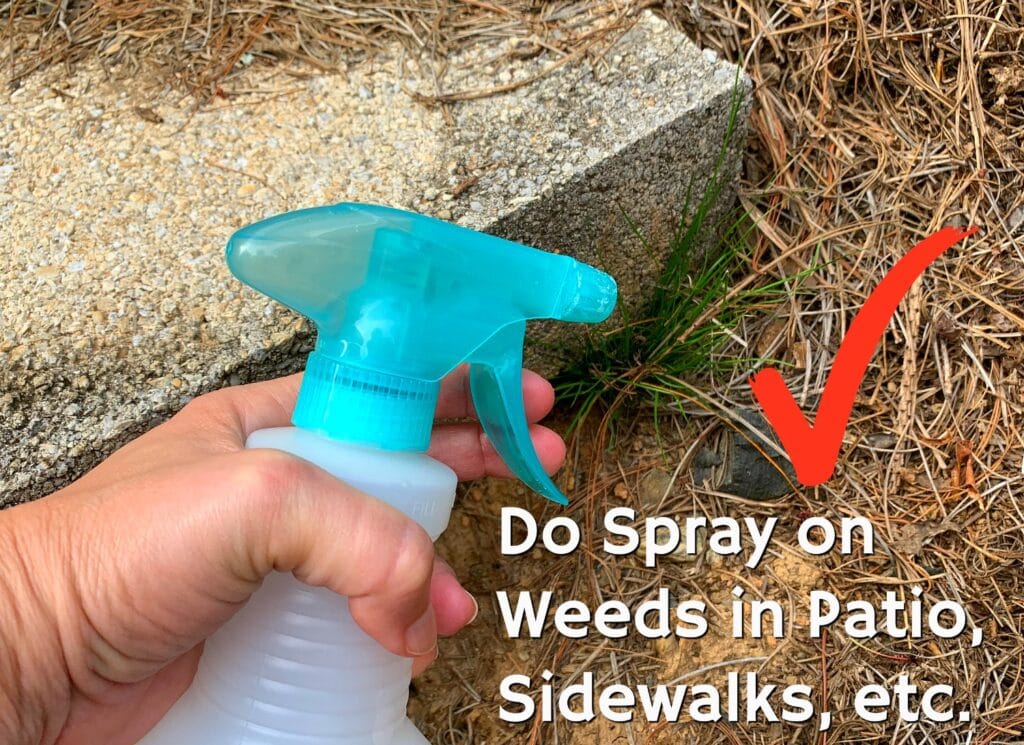 Why Not Just Use Herbicides From the Garden Center?

There are two reasons why I don’t buy herbicides from stores anymore.

The cost and the chemicals.

Let’s start with the chemical exposures. Look at any label on a herbicide or pesticide and it’s full of a lot of scary warnings. That’s for good reason. The chemicals in these solutions are designed for one thing – and that’s to kill.

The definition of the -icide part means to kill. So whatever word is in front of -icide means to kill that thing.

You might think that spraying a weed killer on your garden or grass is just a “spray and forget it” solution. But it’s not.

Because if you have pets or children that play in the yard, residue from the plants and from in the soil can get on their skin or paws. Plus, any wildlife in your area, such as birds, squirrels, chipmunks, deer, etc. could consume the plants that have the toxic chemicals sprayed on them.

Secondly, the cost is insane to keep buying these products. You ALWAYS have to buy them. The problems keep coming back.

When I found a small spray bottle of a herbicide I was considering (and it was really toxic stuff, by the way), it was nearly $6 for the bottle. And I knew I’d need a couple. I did find a more eco-friendly brand of weed killer. And I was disgusted that it cost around $19.

I know natural ingredients cost a lot. (This EcoSmart Weed Killer was expensive, as well, but effective.) But, come on. You can’t expect most people to be able to afford a nearly $20 bottle of weed killer.

In a recent look at the cost of traditional weed killers, I found a gallon in a spray bottle generally cost from $15-23.

However, the cost of this homemade weed killer is MUCH LESS than that!

Which means the cost of a gallon of homemade weed killer is less than $2.60! Compared to the chemical kind that costs around $20. 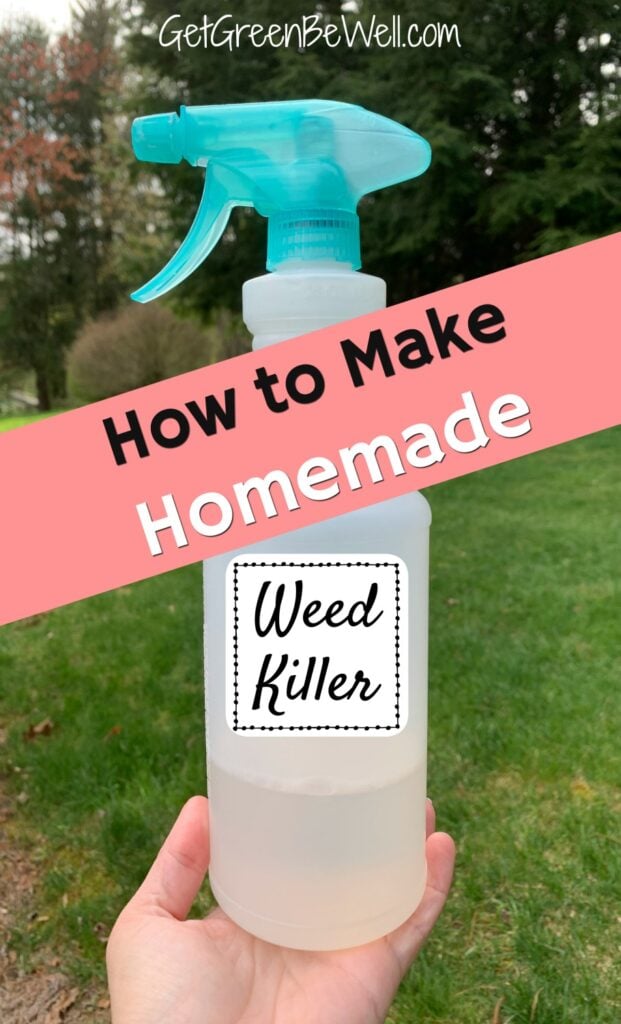 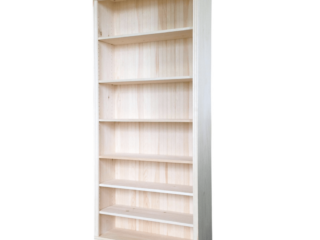 I want to use this on some weeds in my mulch next to a potted bush, is that a bad idea?

Garanteed formula. I've been using it for a couple of years now in UK and it's great for eliminating weeds in the patio/drive etc. Cheap and effective. No Brainer.

If I use this formula on my vegetable garden to kill the spring weeds, how long before I start planting the garden?

Hi John! I don't have a perfect answer for that. The vinegar should reach more of the weeds, rather than the soil. I definitely wouldn't plant within a week. But not sure what the best time frame would be after applying.

I live in NJ and have problem with Japanese knotweed.I wonder if you or anyone else has experience with it?

this doesn't work. it requires at least a 20% vinegar (also known as a horticultural vinegar). that will clearly run you more than your average every day vinegar so there goes your savings.

@Marilyn, it worked VERY well for me!

Marilyn, It works effectively for me and has every time I've used it. Spray when it is hot and sunny and the weeds will shrivel in an hour or so. Regular household vinegar is fine and works.